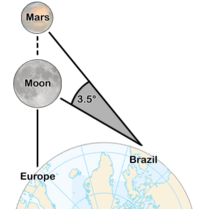 Longitude is given as an angular measurement ranging from 0° at the prime meridian to +180° eastward and −180° westward. The Greek letter λ (lambda),[1][2] is used to denote the location of a place on Earth east or west of the prime meridian.

Each degree of longitude is sub-divided into 60 minutes, each of which divided into 60 seconds. A longitude is thus specified in sexagesimal notation as 23° 27′ 30" E. For higher precision, the seconds are specified with a decimal fraction. An alternative representation uses degrees and minutes, where parts of a minute are expressed in decimal notation with a fraction, thus: 23° 27.500′ E. Degrees may also be expressed as a decimal fraction: 23.45833° E. For calculations, the angular measure usually must be converted to radians, so longitude may also be expressed in this manner as a signed fraction of π (pi), or an unsigned fraction of 2π.

For calculations, the West/East suffix is replaced by a negative sign in the western hemisphere. Confusingly, the convention of negative for East is also sometimes seen. The preferred convention—aathat East be positive—aais consistent with a right-handed Cartesian coordinate system with the North Pole up. A specific longitude may then be combined with a specific latitude (usually positive in the northern hemisphere) to give a precise position on the Earth's surface.

Longitude at a point may be determined by calculating the time difference between that at its location and Coordinated Universal Time (UTC). Since there are 24 hours in a day and 360 degrees in a circle, the sun moves across the sky at a rate of 15 degrees per hour (360°/24 hours = 15° per hour). So if the time zone a person is in is three hours ahead of UTC then that person is near 45° longitude (3 hours × 15° per hour = 45°). The word near was used because the point might not be at the center of the time zone; also the time zones are defined politically, so their centers and boundaries often do not lie on meridians at multiples of 15°. In order to perform this calculation, however, a person needs to have a chronometer (watch) set to UTC and needs to determine local time by solar observation or astronomical observation. The details are more complex than described here: see the articles on Universal Time and on the Equation of time for more details.