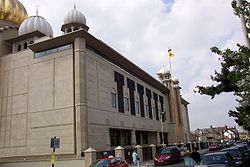 A Gurdwara in Johor Bahru.

A view inside a typical Darbar hall. 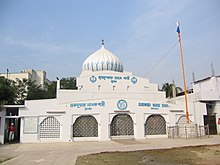 Devotees will sit cross-legged on the floor and must never point their feet towards the holy Guru Granth Sahib. All those who enter the hall must remove their shoes and cover their heads before entering. On entering the hall, devotees walk slowly and respectfully to the main throne on which the Guru Granth Sahib rests. Devotees then stand before the Holy Scriptures, often say a silent prayer, offer a donation (if able), then bow humbly. These manners and practices, though seemingly ritualistic in modern times are actually a well preserved extension of the ancient Punjabi practice of respect (for elders, ruling or religious persons).

When visiting a Gurdwara the following guidelines should be followed: